Skip to content Skip to content
After a lifetime of loathing my body, neutrality felt like a breath of fresh air. Instead of concocting plan after plan to fix myself, I was suddenly able to look up and out. I was no longer just a body. I was a person with a body. A person who also had a mind and a fire in my belly and a whole lot to offer the world around me.

And so my confidence was ignited.

If I ignored my body, I was able to appreciate myself more easily. I was even able to celebrate myself on occasion. 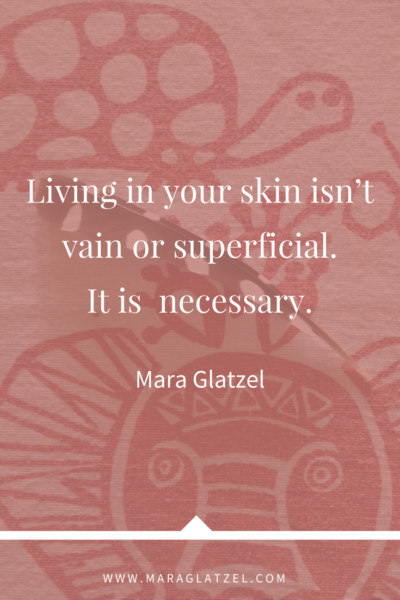 But what of this body that I had left behind?

No longer reviled, my body languished under my inattention. Thinking about it and worrying about it (and what I ate or how I moved or how I looked naked) no longer consumed my every waking moment.

Years passed in this way as I gathered my power and strength. I built my self-worth on my intellect and what I was able to offer people, hiding myself away just out of reach under the veil of goodness and socially sanctioned female empowerment.

It felt so good after everything having felt bad for so long. It felt like a miracle to exist without major upset or call for reinvention.

Waking up in my skin felt like returning to a house that I had left for a period of time. On the Cape, this is what happens to summer houses. They are closed down in the Fall and opened up in the Spring. In the owner’s absence, cobwebs form in the house and the air becomes stagnant, not quite abandoned but not quite lovingly inhabited either.

Returning to my body felt like returning to a boarded up house with cobwebs in the corner and stagnant air.

Not quite abandoned but not quite lovingly inhabited, either.

Without knowing it, my internal pendulum had swung from hatred of my body to indifference. After so many years of self-loathing, the mere absence of torment had felt like care. It had felt like freedom. It was indifference and I called it love.

This worked, for a time.

I built my business. My relationship hummed along. There was nothing explicitly wrong in my relationship with my body and so I swept my discomfort away.

I simply shut that part of my life off – the messy, sweating, living, breathing, bleeding, wanting animal of my body – because with the swinging of that pendulum I had convinced myself that my body was the least interesting part of me.

This division wasn’t cruel. It was polite. Amicable.

Until my body became a closed up house with cobwebs in the corner.

Until I became restless and riotous beneath my skin.

Until it wasn’t polite anymore.

I know, deeply, why people avoid the work of truly living within their skin.

I know, deeply, why women dance around their desire to call their needs to the surface so that they can be honored.

It can be painful to assess the damage and the neglect that you yourself have caused.

It can be painful to realize that tending to one area of your life sometimes means that another area goes by the wayside.

Returning to your body can be rife with shame, internalized judgment, and grief.

It can feel endless, like you’ll never be able to put everything back together again.

But, this body is your home. Your only true home during this lifetime. Paying attention to the vessel that holds your spirit isn’t vain or superficial, but necessary.

In other words, it is worth it.

It is worth the pain and the grief and the stories that must be unraveled. It is worth it to bear witness to any damage done and decide to begin again in prioritizing the actions that make you feel alive.

It is worth holding space for the messiness of your needs as they present themselves one by one for validation and nurturing.

It is worth being called to task.

It is worth it, because the conscious choice to live in your skin is an act of love.

This article originally appeared as a weekly newsletter. To receive subscriber-only content and fresh updates on classes and retreats, click here or sign yourself up in the shiny box below.

Self Care that Works

Are you ready to feel less exhausted? (Like, immediately?) I’ve got your back. Sign yourself & receive my best tools for redefining your self-care so that it actually works for you.

Thanks for subscribing! Please check your email for further instructions.

Something went wrong. Please check your entries and try again.
M A M A // These days my life is full of calico cr

A practice: There are a lot of things outside of o

Hello new humans! There have been quite a few new

Good morning. You do not have to have it all figur

I’m spending time this evening thinking of how I

This error message is only visible to WordPress admins


Error: API requests are being delayed for this account. New posts will not be retrieved.